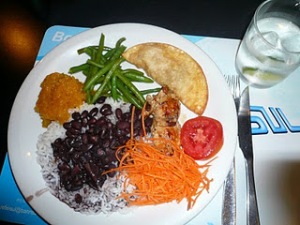 Today is Thanksgiving. But being in a different country has made my observance of this holiday a little different! Instead of waking up to the smell of a tasty breakfast (who knows, pancakes? bacon? toast with the egg in the middle that my mom makes just the way I like) which I would enjoy while watching the Macy’s Parade I got up at 6:15am, scarfed down some oatmeal and caught the bus to not be late for my 7:30 class.

I decided against attending my afternoon class which would require me to eat at the University Restaurant. Dining hall food–I don’t think the government would let me back into the country if they knew I ate that on Thanksgiving Day! This was my Thanksgiving meal:

A little unconventional, and no site of turkey, but still tasty! 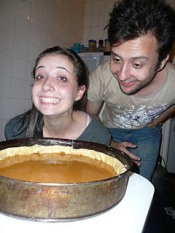 And since it wouldn’t be Thanksgiving without pumpkin pie, that’s what I made! Quite a few disasters (including accidentally dropping ALL of the pumpkin puree I strived so hard to make in the sink, burning the pecans, burning my thumb, and spilling pumpkin down the middle of my shirt) but it was well worth it! My first pumpkin pie!

See how excited everyone is?  Even the post-turkey drowsiness.